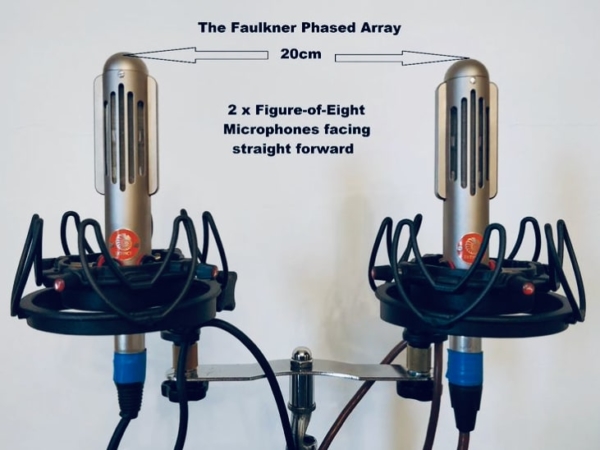 The Faulkner Phased Array was invented circa 1980 by British Classical engineer Tony Faulkner.

To improve the realism of his recordings, Faulkner sought to gain a better sense of ‘space’ and ambience. Somewhat dissatisfied with co-incident microphone techniques, Faulkner experimented with spaced microphones until he arrived at an array which not only gave excellent positionality, but also captured those elusive qualities of openness.

In common with the ORTF Array and the Jecklin Disc, Faulkner’s technique also exploits the inter-aural time difference between the human ears, which allows our brains to calculate the precise location of sounds. The Faulkner Phased Array uses 2 figure-of-eight microphones mounted in parallel, facing straight forward and spaced 20cm apart. Since the microphones are not splayed, this means that they can be placed somewhat further away from the subject, without detracting from the balance. It also means that in a further back position they can be used to record at head height rather than up in the air. In live concert recordings there are sometimes practical reasons why microphones can’t be placed close to the performers. In this situation the Faulkner Array may provide the perfect solution.

Recording in concert halls and churches where there is sometimes rather too much reverberation, another benefit of this array is that the dead zones of the figure-of-eight microphones are pointing straight out to the sides. This greatly reduces unwanted reflections and thereby improves the clarity and ‘presence’ of the subject. 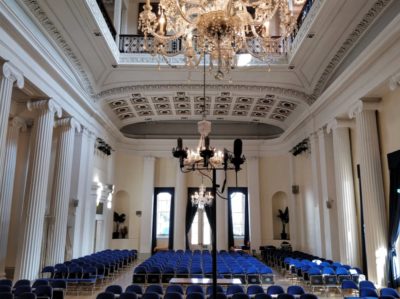 This recording features dynamic 17 year old violinist Isaac Williams, winner of the Audience Vote in this year’s Gloucestershire Young Musician of The Year. He is accompanied by pianist John Wright.

(N.B. The other microphones on the stand are not part of this recording.)

At a time when engineers seem to be very much obsessed with close mic-ing everything that moves, it is refreshing to find a stereo microphone technique which encourages recording from a more natural perspective.

Click here to read the full blog post, including an article by Tony Faulkner himself from Hi-Fi News (July 1981).