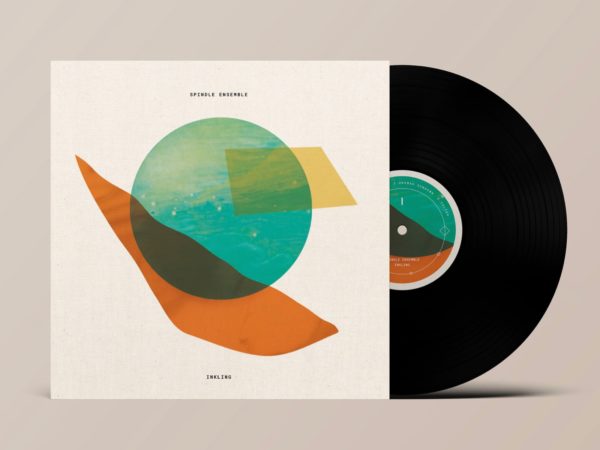 With the second Spindle Ensemble album, ‘INKLING’ being released today, Daniel Inzani – the quartet’s composer and engineer – tells us about the recording process, the technical and physical considerations of recording a modern chamber quartet, and why ribbons are his ‘go to’ microphones.

“Three years ago I made the decision to record my chamber quartet Spindle Ensemble’s second album ‘Inkling’ myself at different churches and concert halls around our home town of Bristol. It’s been a huge learning curve, a very rewarding experience and I’m so pleased that it is being released on vinyl by a new independent label named Hidden Notes Records (founded by Hidden Notes Festival) on 27/05/21. I wanted to document the recording process which may be of interest to you if you’re either a bit of microphone nerd and/or are thinking of recording chamber music in a similar way yourself.

Our line up is, as far as I know, unique for a quartet:

Each song has been recorded to mimic an audience member’s experience of hearing Spindle Ensemble performing live. The listener is physically positioned in venues with atmospheric acoustics, surrounded by the musicians so that each instrument’s position can be picked out. The tone of my recordings is not aiming to be high definition at all costs, but a delicate balance between clarity and a warm character similar to analogue recordings of last century, designed to be listened to on a vinyl record.

To achieve this I set up a 16 input digital location recording studio based around a selection of vintage ribbon microphones. At the centre of each recording are the signature BM9 Viking and Black Ops ribbons handmade by Extinct Audio, alongside some older refurbished matched pairs of ribbons from X-Audia such as the GR2 Grampians and the unusual but useful cardioid ML-19’s from Oktavia. I also used a few condensers, a Neuman U47 clone for cello and some Line Audio CM3 pairs for recording the reverb at the far end of each venue.

There are two main reasons I wanted to use ribbons: their character of sound and in order to employ the Blumlein array technique. This is where 2 matched ribbon microphones are positioned one on top of the other, pointing in perpendicular directions. With each microphone fully panned a three-dimensional sound image of the room is created from that physical point. I used the BM9 Vikings for this every time and used a helpful stereo coupler which allows you to screw the microphones together as a perfect Blumlein pair.

I would position the quartet between 2 and 3 meters away from the Blumlein pair in a horseshoe configuration, getting the positioning of the musicians right is the key to nailing the recording and there are many considerations. The string players were always in the centre for musical performance reasons, Harriet’s tuned percussion on the right and I played (predominately grand piano) on the left so that with the lid open the piano sound was directed at the Blumlein pair.” 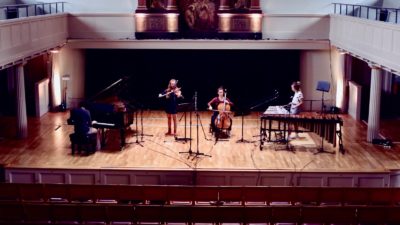 “This stereo image is the bulk of the final sound. It really does achieve the immersive live feel of a concert and the BM9’s are exceptional, they have the clarity and the warmth which have made them my go to for almost anything. The volume balance between the instruments was pretty good, the cello and piano can get a bit lost in quieter sections whilst the marimba can be dominant in the loud sections. So it’s important to close mic everything to be able to balance the levels but also to control the instrument detail that is lost in the lush acoustics of large rooms. Having such high ceilings gives a natural reverb which made all the instruments sound fantastic, however in these types of environments the initial attack sound of a bow on string, or mallet on the marimba is quickly lost unless the microphone is within about a meter of the source.

With each close mic, I carved out any problem frequencies with a dynamic EQ and boosted the frequencies where the instrument’s tonal qualities were lacking in the Blumlein pair (and boosted some low frequencies when needed for some extra low warmth). I then compress those close mics subtly and blend into the mix appropriately panned to maintain the immersive image of the room. I found that compression alone was not enough and I had to automate the close mics to compensate for the large dynamic range of our compositions. I had to use my ears a lot here, the desirable instrument
qualities need extra boosting in the close mics when we are playing quietly and vice versa for the loud sections.

The dynamics are really large in our music, my experiences from recording ‘band music’ beforehand hadn’t prepared me for some of the issues the dynamic range presented when capturing chamber music. Luckily all the ribbon microphones from Extinct Audio and X-Audia have been given a high impedance output and I boosted the signal gain with in line FetHead preamplifiers. This enabled me to digitally capture our performances in high definition with minimal hiss introduced (even at the low volumes of the dynamic compositions) and still have the high frequency detail that can otherwise get lost on analogue ribbon recordings.

The beautiful saturated tone of these ribbon microphones have the warm nostalgic sound I love. Capturing the audio with the ribbons meant I could make recordings with an analogue feel but with the convenience and reliability of a digital interface. However I did also treat some of the audio with some good tape emulation software for a little extra old-school tone.

However, the real key to capturing a great recording of any chamber music (excluding the music and the players of course) is the room. You can half emulate it with software, but having instruments interacting in the ambience of a beautiful sounding space is irreplaceable and the musicians will be so much happier too. That’s the big advantage of a mobile setup, we were very grateful to record in the cathedral like acoustics of St Ambrose Church and the spacious dynamic acoustics of St George’s Concert Hall.

Our debut album BEA was recorded in three days at Grand Chapel Studios shortly after we had formed and with no guests. In contrast, Inkling was recorded over a two year period with venues chosen to suit each piece of music. We decided to layer up ‘Waves’ and ‘Okemah Sundown’ with string, woodwind, brass and percussion sections to attain the orchestral scale those compositions needed in order to be fully realised. Each overdubbed section was recorded using the same techniques and so maintain the acoustic environment with detailed instrument definition.

After a lot of experimentation we achieved the sound we really wanted, finding a balance between modern and traditional ensemble recording techniques. If you want to try something similar then a lot of churches will let you use their space for a very reasonable price, often for free, and they tend to be happy that the space is being used for something creative.

Here’s a few extra tips that you might not think of until you’ve done it a couple of times:

Spindle Ensemble’s latest album INKLING is out now on Hidden Notes Records. Listen to or buy the album on bandcamp